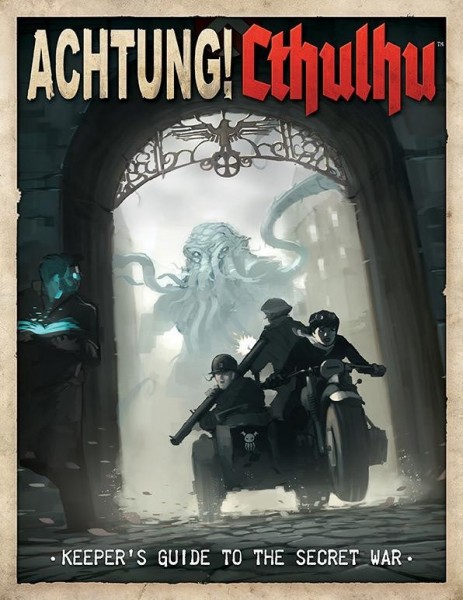 Achtung! Cthulhu is a terrifying World War Two setting, fully compatible with the Call of Cthulhu, Sixth Edition and Savage Worlds roleplaying games. This is the Keeper's Guide with everything GMs and Keepers need for late 30's and 40's wartime adventure!

Discover the secret history of World War Two: stories of amazing heroism, in which stalwart men and women struggle to overthrow a nightmare alliance of steel and the occult; of frightening inhuman conspiracies from the depths of time; of the unbelievable war machines which are the product of Nazi engineering genius and how close we all are to a slithering end! The Secret War has begun!

The Keeper's Guide to the Secret War is a full-blown tome of dark knowledge, including:

In fact There is a whole Shoggoth's worth of Cthulhu villainy, enough for any Keeper to have his investigators dead, insane or running for their lives in no time! The Keeper's Guide to the Secret War is the essential Achtung! Cthulhu wartime reference for any Keeper or fan of the Cthulhu Mythos.

Requires the Call of Cthulhu 6th Edition or Savage Worlds Rulebooks to play.