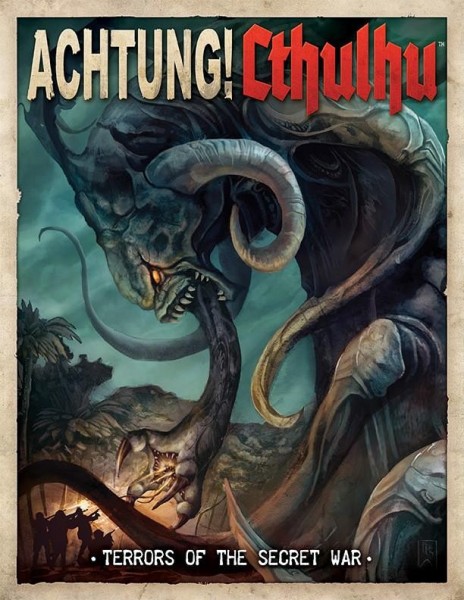 Discover the mightiest terrors of the Mythos: the Great Old Ones, the Outer Gods, and their foul servitors and cultists; the spells and artefacts that can be brought to bear against them in mankind's struggle for survival; and the strange and unusual weapons that might just be the saviours of us all or prove to be our downfall.

Terrors of the Secret War extends the horror on the battlefield over 128 full colour pages, and includes:

- A new and simplified mass combat system for taking on the Mythos biggest threats
- Descriptions of more than 25 gods and their lackeys, their tactics, and their weaknesses including Great Cthulhu himself
- Hints and tips on how to include Terrors in your own campaign, and how to square up to them
- New artefacts, spells, and weapons such as the Allies so-called lightning guns to help take the fight to the enemy
- In fact, a whole dossier's worth of useful information to help you expand your campaign out into the wider world (and murkiest depths) of the Secret War.

Requires the Call of Cthulhu 6th Edition or Savage Worlds Rulebooks to play. This is a supplement for use with the Achtung! Cthulhu: Investigator's and Keeper's Guides.