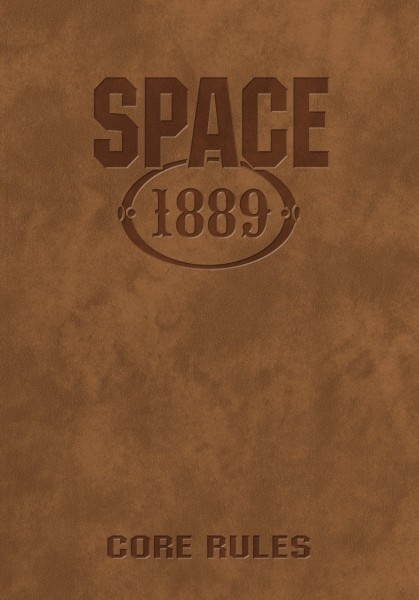 Beschreibung
Beschreibung
This is the Collector's Edition of Space 1889 the Core book made with a beautiful faux... mehr
Menü schließen
Produktinformationen "Space: 1889 Core Rulebook - Limited Edition"

In the year 1870, American inventor Thomas Edison paved the way to the stars!

He reached Mars with the prototype of an ether flyer and was the first man to set foot on the red sand of a foreign world. He was the first of many to come who would haze in astonishment at the wonders of Mars and its inhabitants - the canals of the Red Planet, built many millennia ago; cities that were already old when on Earth, the Sumerians stacked clay bricks to build the first settlements; and relics of old technologies the functionality of which has long been forgotten. Numerous other explorers have follows in Edison's footsteps, not only reaching the Red Planet, but pushing forward to the other planets.

The misty swamps, seas, and jungles of Venus offer fantastic raw materials and bizarre creatures - most of them dinosaurs. Plantations and settlements are built at great expense, defying all adversities.

Mercury too has many precious resources to offer, and it too is inhabited by primeval life forms. In the twilight zone between a hot and a cold side, daring explorers will find the foundation for their future fame and fortune.

But adventurers can also be found in the remote, uncharted areas on Earth, and the colonial powers' struggle for power and influence can be just as exciting as stunning inventions or encounters with famous people.

Space: 1889 brings to life the literary fantasties created by Jules Verne, H. G. Wells, Arthur Conan Doyle, H. R. Haggard, and many others - classic adventure stories and science fiction adventures with a fantastical or nostalgic touch. They all take place during an age obsessed by a belief in technology and progress, in a world lit by gas lamps, powered by steam engines, and filled with the spreading wonders of electricity and ether; a world of inventive genius and spirit for adventure.

Space: 1889 is a science fiction roleplaying game in a more civilized time. A time when gentlemen and ladies of good character discover that there are adventures to be found in London's fogbound alleys just as much as there are on the dusty streets of Syrtis Major on Mars. A time when soldiers might be posted to East Africa or Mars by order of their country; a time when inventors rush to test their latest designs and their latest theories; a time when historians search for the secrets of the ancient Martians; and when wild Venusian Lizard-men and proud Martian steppe warriors must serve their tribes and seek fame and fortune in a time when aliens from Earth have come to their planets.

At the core of this roleplaying system are the innovative, easy to learn Ubiquity rules that emphasize storytelling and cinematic action.