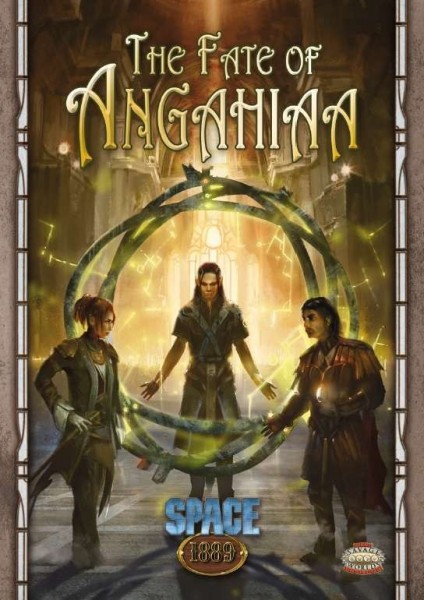 Beschreibung
Beschreibung
Everything Jules Verne could have written. Everything H. G. Wells should have... mehr
Menü schließen
Produktinformationen "Space: 1889 - The Fate of Angahiaa (Savage Worlds Edition)"

Mars and its city states are the most important concerns of Earth’s colonial politics. Liftwood is a critical, highly sought after resource, and not all nations have equal access to it. But the Martians are playing their own games and seek to use their contacts with the humans for their own plans.

The Canal Prince of the small Martian city-state of Angahiaa seeks to expand its power through a trade treaty with the German Empire. But other groups within the city do not want any human influences, while others seek power over the city themselves and will use the foreigners for their own schemes.

The player characters forming the German delegation are drawn into the midst of the battles and intrigues for power in the city. They must maneuver between the decadent Canal Prince, his enemies in the nobility and guilds, as well as the priests, the slaves, and the Hill Martians of the surrounding valleys, to find friends and allies.

The player characters can greatly influence—the Fate of Angahiaa.

For a successful mission in the Martian City, social skills and a readiness to deal with the local situation are required. All in all, a wide variety of challenges await the player characters, ensuring that physical, inventive, or academic skills are all of great use.

The player characters should be willing to support Germany’s interests, or at least be neutral towards them. Even so, options are provided should that not be the case.

This adventure is written for the Savage Worlds Version of the Space:1889 RPG.